The Arsenal star has hit out at fans, the media and the German football federation (DFB), claiming they have double standards in their treatment of people with Turkish roots.

Ozil, who is of Turkish descent, cited comments from far-right politicians and football supporters when he said he would “no longer be playing for Germany at international level whilst I have this feeling of racism and disrespect”.

He added: “Racism should never, ever be accepted.”

Gundogan is also of Turkish descent.

Reinhard Grindel, who was the head of Germany’s soccer federation at the time, accused the players of allowing themselves to be “exploited” by Mr Erdogan for political purposes.

Some German politicians questioned Ozil and Gundogan’s loyalty to Germany and suggested they should be removed from the national squad ahead of the World Cup.

© Reuters Gundogan, left, has distanced himself from the photo with Ozil, President Erdogan and the Turkish footballer Cenk Tosun

Gundogan distanced himself from the picture, but Ozil refused to comment publicly until Sunday, when he published a three-part statement in English defending his actions and attacking those who have criticised him.

He wrote that the “picture we took had no political intentions” and “was about me respecting the highest office of my family’s country”.

Ozil, who won the World Cup with Germany in 2014, also took a swipe at the country’s media who suggested that he was partly to blame for his side’s group-stage exit from the 2018 tournament.

He said: “This crosses a personal line that should never be crossed, as newspapers try to turn the nation of Germany against me.” 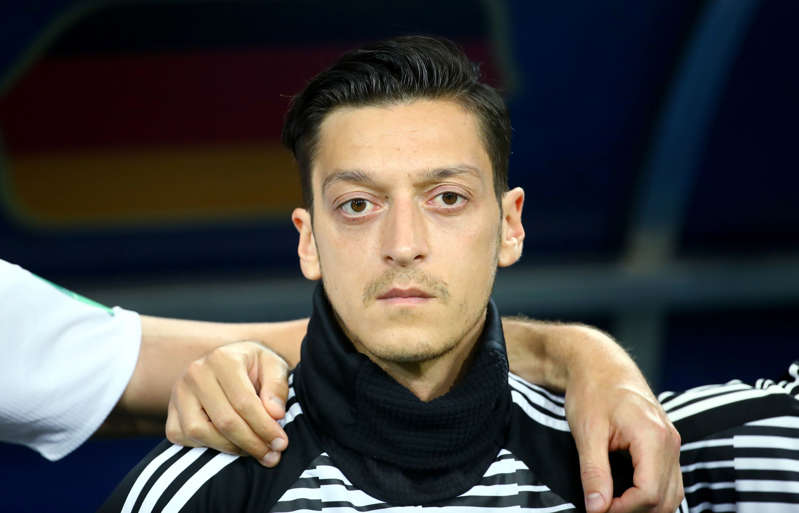 Ozil noted that there had been little criticism of former Germany captain Lothar Matthaus over a recent meeting with Russian President Vladimir Putin.

The midfielder reserved his sharpest words for Mr Grindel, alleging that the federation president had been “patronising” towards him.

He continued: “I will no longer stand for being a scapegoat for his incompetence and inability to do his job properly.”

The footballer claimed that Mr Grindel had made “unforgivable and unforgettable” comments about immigrants and Muslims in the past.

On Twitter, Ozil said: “The treatment I have received from the DFB and many others makes me no longer want to wear the German national team shirt.

“I feel unwanted and think that what I have achieved since my international debut in 2009 has been forgotten.”