Ajegunle is known for being one of Lagos’ toughest, most dangerous slums, but it also has another reputation – for producing some of Nigeria’s top footballers. So what’s the secret to its unlikely success?

For a football-obsessed nation like Nigeria, talent can be found in every corner, but there’s definitely something special about Ajegunle, or AJ City, as it’s known by locals.

Life is not easy for many of the residents of this sprawling ghetto.

They have to contend with high crime rates, as well the absence of running water, grid-powered electricity or healthcare.

So what are the factors that contribute to Ajegunley’s footballing pedigree? Diversity, for one.

“It’s a community with so many people from different ethnicities,” says Bennedict Ehenemba, a football scout for

German clubs who is a native of Ajegunle.

“Ajegunle accommodates the Yorubas, the Igbos, the Hausas, the Itsekiris and all the other tribes in Nigeria.

“It’s a raw talent hub of Nigeria,” he tells me.

Many success stories can be traced back to two local institutions – St Mary’s Catholic Church and the Navy Barracks Camp.

They remain safe places for many young people to play the game.

Other open spaces are often claimed by so-called “Area Boys”, unruly gangs who often demand a fee for people to play there.

Super Eagles striker Jonathan Akpoborie, who made his name in Germany’s Bundesliga in the 1990s, also honed his skills here.

“This is actually the home of football in Nigeria,” Akpoborie tells me, adding that the game is seen by many youngsters as a route to a better life.

“I don’t want to downgrade the area by attributing the success of footballers to poverty but there’s just nothing to do for the kids.

“They spend most of their time here playing football and in so doing they develop themselves and naturally become gifted footballers.

“In one national team there’s always one player who originated from Ajegunle. 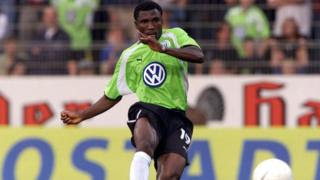 “It’s exactly how I started – the grown-ups play first, we watch them play, then eventually we get in the field. They were inspirational to us.”

The slum also has an established system of grassroots football, which encourages talented youngsters to play competitive football for local clubs at an early age.

This often gives them an edge over players at competing academies across the country.

Alfred Emuejeraye, who plies his trade in the Swiss lower leagues, also grew up in Ajegunle.

He believes the secret of the slum lies in its deep love of the game.

“The people here, the community are passionate about football, passionate about everything and are driven to succeed in whatever they do from musicians to taxi drivers… It’s an all-round community,” he tells me.

Now he lives in some of the world’s biggest cities, but still remembers Ajegunle fondly.

“It was very tough growing up there. It’s not like in Europe where you have everything provided.

“You have to look for money to buy football shoes, jerseys, transport and even water for to drink after training. If you can’t afford the transport then you stay – and those who stay are great players,” says Ighalo.

Bolarinwa Olajide is a sports reporter with Lagos-based radio station Wazobia. He saw many of these players emerge from Ajegunle over the years.

“We see the hopeless, those who know they have a talent but they can’t exhibit it anywhere. They can’t afford fees to join a football academy, so they go to Ajegunle because they know scouts come to watch them play, and it’s a chance to show what they can do as footballers,” he tells me.

Leicester City and Nigeria midfielder Wilfred Ndidi did not grow up in Ajegunle but played against boys from the slum during his time at an academy in Lagos.

He believes Ajegunle has produced good football players because the boys there “work hard, the lifestyle is difficult so they try to work very hard and come out with their best.”

To keep the Ajegunle legacy going, some of the footballers are already giving back to the community with projects to nurture future talent.

Akpoborie is helping to identify future football talent, while Ighalo is building an orphanage in the heart of the slum.