When European explorers discovered the Yoruba kingdoms in West Africa in the fifteenth century, they found a civilization already established over 500 years earlier.

The culture spread across the world, partly as a result of the slave trade, with its vibrant artistic traditions, albeit fading, still felt as far as Cuba, Haiti and Brazil.

“Every piece of an Ethnik product is art,” says founder and creative director Tunde Owolabi, who set up the company in Lagos in 2015.

“This year has been a stepping stone for us, because we’ve been able to establish Ethnik as a strong brand.” 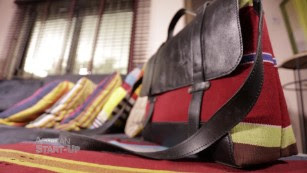 Owolabi, also a photographer, got the idea when photographing events celebrating this culture.

“I’m Yoruba, so I needed to go back to my roots,” he says.
Today, the Yoruba people make up 12% of the population in Benin and 21% in Nigeria, Africa’s most populous country. Yoruba is also the name of the group of languages spoken by them.
The fabric is inspired by Yoruba design.

Connecting with the past through fashion

Packed with vivid, blue, yellow and red patterns, Ethnik’s sneakers, bags and smartphone cases are a way for their customers to connect with their heritage through fashion, Owolabi says.

“We are creating a movement of people who want to identify themselves with where they are from.” 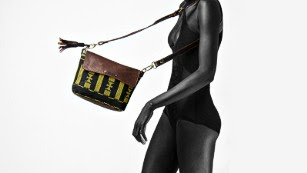 The hand-weaving technique has been passed down from generation to generation, a tradition Owolabi hopes his venture will help revive.
“It’s all about sustaining and reinventing the culture and making sure that it doesn’t die.”

What is Aso Oke?

Aso Oke is a traditionally hand woven wool fabric, made on looms powered with foot pedals.
Commonly seen in everyday Yoruba clothing in the past, it’s now mainly worn on special occasions.
“I needed to find other ways of using Aso Oke and making it more appealing to young people, because after the weddings, after the ceremonies, people don’t wear Aso Oke any more,” Owolabi says.

The hand woven wool fabrics are made on foot pedaled looms.

Ethnik’s creations are handmade following the Aso Oke method. Some are designed with the help of local artists, who draw unique patterns on the sneakers, says Owolabi.”You won’t see the kind of artistry and detail that we put in our own fabric [in other brands].”With one cobbler and an initial capital of only $84, the company has grown to nine employees and saw an annual revenue of $25,000 in 2015.

But launching a fashion brand does not come without obstacles, Owolabi explains.

“Since Ethnik started we’ve been faced with a lot of challenges: people, materials, logistics.”

They have seen global interest but shipping products can be expensive.

“The most pressing one is the logistics right now, being able to distribute around the world,” he adds.